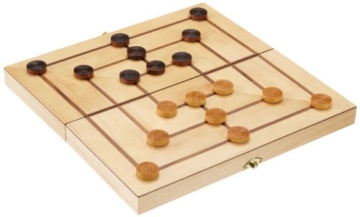 Nine Men’s Morris, also known as Merrills, Mill and Merels, is an old English game that goes back to antiquity – evidence has been found for the game in ancient Rome and possibly Ancient Egypt. More recently, references in the works of Shakespeare have given it an image of the archetypal medieval board game. Like most of the best games, Nine Mens Morris rules are simple, the objective being to capture opposing pieces by forming lines of 3. It is an under-rated game of skill that is easy to learn but sometimes requiring deep thought – a bit like grown-up tic-tac-toe (or noughts and crosses). It is an entertaining game for beginners and veterans alike and something for older children and adults to enjoy.A nice large Nine Men’s Morris game set featuring a folding wooden board. When not in the use the board folds in half providing a storage space for the playing pieces.Nine Mens Morris is also known as Merelles, Merels. It’s difficult to find a good size, straight-forward Nine Mens Morris board these days but this one fits the bill perfectly being well-made and almost a foot square. It’s a nice looking Nine Men’s Morris set at a great price.Contains small parts. Unsuitable for children younger than 4 years old.Approx. dimensions: 295 x 148 x 50mmProduct Ref.: 00H4R6